Part of a series about the Citadel LRP system 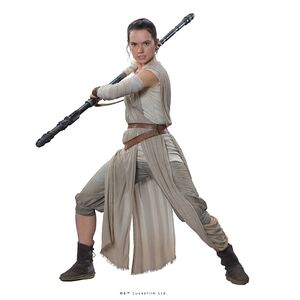 Rey in Star Wars; most Star Wars characters are inappropriate as they appear too futuristic, but this style of dress is definitely appropriate

If nothing else, read this:

The main costume theme would be Hope over despair. This is a world that declined, but one where there wasn’t a longstanding world-weariness or horror. There was, however, a move towards relying on oneself, and the small group, due to the failing of large institutions. This shouldn't be mistaken for selfishness - in fact, it was generally more compassionate, as one’s actions and the impact they had (for better or worse) were drawn into stark relief.

Whilst designing this setting, we have attempted to allow people to re-use existing kit. Anything that was suitable in Breaking Worlds, the previous system, is likely to also be suitable in this setting; although adding small modern touches as described below would be appreciated.

In order to clothe themselves, members of the Outlook have four main options:

As such, styles can vary quite heavily. 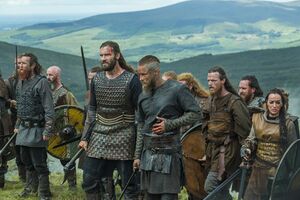 Vikings from “Vikings” (They’re a little unclean right now, but they just finished a Linear)

Conspicuous consumption is not really a thing in the Outlook, due to the plentiful nature of the resources; this is not always the case elsewhere. Your clothing should aim at seeming practical, overall, and wearing impractical clothing is not a sign of status. (This especially means that if you wear something on your head other than a hat, it’s because you want it there; headdresses are not the norm, and if you want your head to look adorned, a few flowers or a hat would be more appropriate). At the same time, this means that what you wear is what you want to wear, there are no “sumptuary laws”. Feel free to wear a single piece of jewellery, and claim that it is a family heirloom, or a symbol of your tribe.

One or two items of plain modern clothing (think chinos, knitted jumpers or explorer jackets) are appropriate, if paired with other items. Denim and camouflage are inappropriate, but fleecy tracksuit bottoms are fine. Try and put a fantasy twist to anything that is overly modern. For example, wearing a cape with a knitted jumper, or greaves over chinos.

There are a lot of flowy and wrapped fabrics, because they layer very well. 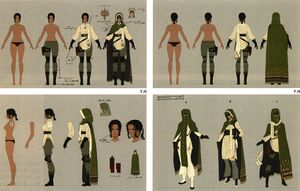 Resistance members from Nier:Automata. There are a lot of good layered looks in this game

Clothing tends towards the simple rather than the fancy, but there are a lot of well made and rugged clothes; many Tribes make outfits to last for life, maybe more than one life. Most costumes are tried and tested, designed to last in the elements, often based around the following ideas:

Some people do wear distinctly ‘pretty’ clothing- these people are often courting the attention of AI, by borrowing some of the styles their holograms are found in. Admittedly, this often appears to have no effect on the way an AI treats someone. 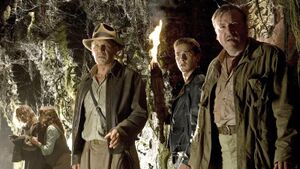 A picture which gets across the more modern side of the feel, from Indiana Jones

You can adorn your look, sparingly, with such items as:

The important thing is none of these should be the only element of your look- they should be something that dresses down something medieval, for example. 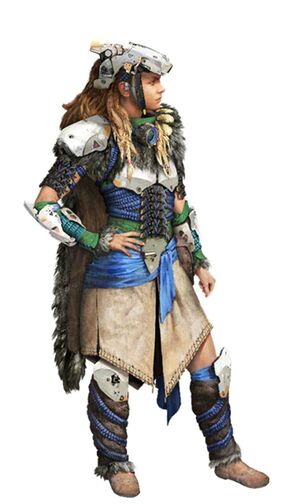 Pieces of modern body armour may be appropriate, but please avoid it looking like a uniform, and especially don’t wear anything that might make people uncomfortable when you’re seen on the Meadows. A single pauldron or gauntlet would look far more appropriate than the entire set. Armour is based on the level you bought up to, rather than the precise phys rep. If you attach technology to your armour, of course, we will ask that this be phys-repped in some way.

The machines in the Outlook often seem to release small pieces of chained maille, and full pieces of metal, sometimes in easy-to-wear shape, so medieval and Dark Age armour is also appropriate; your character may attach significance to the providence of said armour.

A Tribe is a shared grouping - often a genetic one, though it is always possible to choose your family. Accordingly, Tribes often share a lot of clothing, not least because they passed down the same manufacturing techniques. If you are aiming to be in a Tribe with someone else, you can pick one shared aesthetic that is easy to copy - for example, you all wear a particular coloured scarf, or carry a particular type of whistle. Again, this isn’t a uniform; more a demonstration of family solidarity. 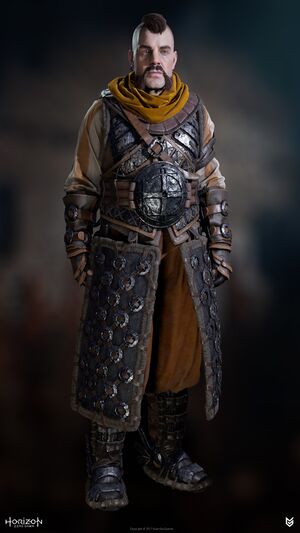 Daniel and Tania want to both belong to the same Tribe. They decide that one of the shared parts of their Tribe is that the people who are in it are skilled hunters, so their costuming should reflect that element of their background. Daniel decides that they want to go down the route of an archer, and wears baggy clothing that allows them to conceal arrows. Tania, on the other hand, thinks her character will be up close and personal, so wears a greave and carries a large spear. The shared element they decide on is binoculars, as their tribe does hunting over long distances. To reflect the fact they are hunters, they both agree to wear mostly dark colours, like greens and browns, and have a brightly coloured sash round their forehead so their tribe knows not to attack them by accident when they are skulking around. 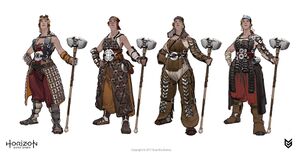 Techgnostics often carry around a lot of machinery, which they can use to interface with AIs - this is called a medium. However, due to the nature of their fragile, precious (and jury rigged) status, many carry them inside boxes, or other forms of adornment. OOC this means you don’t have to phys-rep a huge pile of computer, but IC this allows for a choice of styles: from more religious inspired reliquaries, to a technologically stuffed biscuit tin.

Resistance members from Nier:Automota. Someone looking to copy an AI style of dress might look like this.

Your character will have seen what AIs wear - largely the difference is that they don’t layer what they wear, as they don’t need protection from the elements. They have more of a tendency towards robes, tabards, and block colours, projecting a very uniform aesthetic.

Those based on living people can wear very eccentric doublets and hose, or elaborately tailored outfits. Fundamentally AIs’ fancy clothing goes towards the medieval and renaissance, rather than the 21st Century.

Any medieval outfit can be justified by ‘I saw an AI wearing it and wanted to wear it too.’ 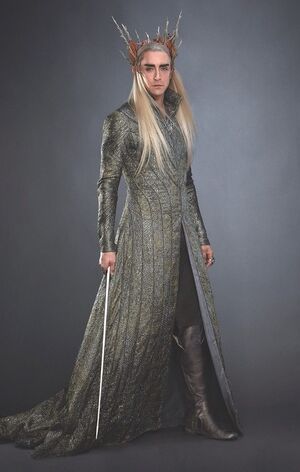 Wood elves from the LOTR films. Thranduil here is at the most fancy this end is likely to get, but looks mostly ready for war (don’t wear a train/cappa magna)

If you are a gene-strain, you will invariably have mutations that mark you out as different from the traditional model of humanity. They are often connected to a specific area of the body, and have a patchy tendency to them - think like Futurama, in terms of areas of the body looking human, and others looking more monstrous or animal.

Thus, a full animal face mask would not be appropriate, but fangs and fur around the eyes would be.

Most of this can be done with face paint, to signify scales or fur, gloves to give the impression of a mutated arm, and horns that can be worn to change your silhouette.

Help! I need to find some emergency kit for my character in Cambridge! 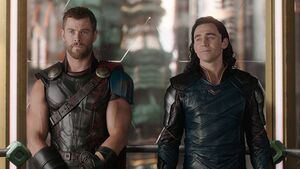 Main characters from Thor: Ragnarok (Thor and Loki here), who blend Norse and sci-fi, are an appropriate look - although maybe keep your arms covered as this game takes place in the UK.

Whilst we are going for a sci-fi feel that might come close to pulp, we want to make it clear that the look we are aiming for should not be reminiscent of grungy “recent” post-apoc like Fallout, or of futuristic-feeling space-faring sci-fi such as Flash Gordon and Star Trek.

Bodysuits, power armour, and formal modern outfits (no matter how dishevelled) are all inappropriate.

Aesthetics to be avoided